The Sharks Are Born

On August 16 2007 the Great Southern Football League (GSFL) held their monthly Directors meeting. This meeting was also attended by the Presidents of all the clubs, as well as another special guest – the Acting Regional Manager of Football Development from the Department of Sport & Recreation. He addressed the meeting and outlined the need for another “Colts” team to be formed to compete in the GSFL competition. This was primarily due to the increasing local population and the vast amount of juniors coming through the system and more opportunities were needed for these players to compete at a higher level.

A subsequent meeting was held on 27 November 2007, primarily to discuss the wish of the Kojonup Football Club to leave the GSFL and move to the Lower Southwest Football League. Also on the agenda was a proposal to see if a “Colts” team could be formed to compete in the GSFL in the 2008 season. The Railways Football Club had offered to “host” the new team for the first year and then it would rotate through the other clubs. It was also decided to play the new team under the GSFL banner until a fourth club was established to take over the control of the colts and then expand to having teams in all grades.

Further meetings were held at the Department of Sport and Recreation to decide on a name, colors and to find a coach and support staff to try to get the idea off the ground.

So was born the “SHARKS” with the colors of Teal, Black & White. This was said to reflect Albany ‘s magnificent coast line– Teal of the ocean, Black – of the granite rocks and White – of our magnificent sandy beaches.

The Sharks Join the GSFL

Joe Galantino was invited to be the first coach of the Sharks with Brett Turpin being his right hand man and various others provided great individual support. Getting a colts side on the ground was only the first little step, and the job of building a club was the next big step. On the 29 May 2008 the GSFL held a special meeting and invited interested parties and some special guests from the WAFC & WACFL to try to get the ball rolling.

The result of the meeting was the formulation of a “Sharks Steering Committee” and those who volunteered to join the steering committee were charged with the task of trying to build a football club from the ground up. Brett Turpin was the Chairman of this steering committee and Mr. Paul Higginson (GSFL General Manager) acted as secretary.

Many meetings, lots of issues, thousands of ideas flowed and the Albany Football and Sporting Club was Incorporated on 10 October 2008. The new club held its Inaugural Annual General Meeting on the 13 November 2008 at the PCYC in Sanford Rd , where Alan Smallwood was nominated to become the Club’s first President.

On December 1 2008 the Albany Football & Sporting Club applied to the GSFL to become an affiliated club and nominated to field both a Colts and U/17’s team for the 2009. Joe Galantino again took the reigns of the Colts side and Matt Taylor took charge of the U/17’s. There was a groundswell of support from senior players around the league to also form a senior side in 2009, but due to a lack of volunteers behind the scenes to run the club, the club was unable to commit to fielding any additional sides.

2009 saw the Colts side become an extremely competitive side with the club’s first ever win on March 29, eventually finishing the season 3rd after losing the Preliminary Final. The U/17’s side went one step further in 2009 and won the Club’s first ever Premiership.

2010 was another huge step forward for the club with the introduction of it’s first ever senior side being fielded in the GSFL. Although many, including the playing group wanted to field a League side, it was deemed more realistic to field the side in the Reserves. This side was coached by Alan Smallwood and included at least 12 players who had never played football before, but was now the foundation of the club’s senior team. Kyle Hamilton was nominated as the club’s senior Captain. Their first win came on May 15, eventually winning 2 games for the season but scaring many of the established GSFL on more than one occasion.

2011 was a year of consolidation for the club. The Reserves & Colts side suffered from numerous off season player losses and although competitive, rarely notched up the elusive “WIN”. The 17’s however more than held their own losing their two finals games by a combined total of three points.

2012 was the year everyone had been working towards and waiting for in that a League side was finally put out on the ground. April 28 was the day the Albany Football Club made its League debut in the GSFL under Joe Galantino as coach. The day and game was marked with the playing appearance of three time AFL Premiership player and Brownlow Medallist, Jason Akermanis. Although the Sharks didn’t notch a win this day, it drew a huge crowd and put the Sharks on the football map. Michael Bennell was sensational in his league debut collecting possesions at will and kicking four goals on the day, plus took a screamer over the top of a large pack. The season turned out to be a very long and difficult season for the Sharks, without putting a win on the board, but at the end of the day we had arrived in the GSFL. The Colts side fell just short of a Grand Final appearance losing in the Preliminary final.

2013 saw a marked change in direction for the club bringing in new coaches from outside the club. Peter Larkins was appointed League Coach and we looked to have fielded a competitive team. Beating Wagin in a scratch match gave us all some hope for the year. Early season injuries took their toll and Peter unfortunately left midway through the season due to work commitments. Cleave Humphries took over as interim coach for the remainder of the season. Although looking dangerous at times it was to be another year without a win for the League team.

2014 was to be another year where although we went forward we didn't get that elusive win. Under Leon Wynn a core group of players put in a big effort without reward. It was a well disciplined side that ended the year without any cards. Jake Louthean returned to play for the club.

2015 was a year of big changes. Alan Smallwood took over as League Coach after being President for 7 years. Geoff Oldfield took the reins as President.

Smallwood brought fitness, discipline and a game plan to the Sharks. Frightening some sides though the year we eventually notched our first league win in round 15 against the Mount Barker Bulls. This was to be the clubs finest hour to date. The win came after 59 straight losses. The win became State news and was widely published on social media, television and all the newspapers.

The Under 17’s and Colts both made Grand Final appearances but failed to gain a premiership. The Reserves won a record 3 games for the year. Certainly our best year to date and one to give players and members some hope going forward.

2016 saw James “Mini” Eaton take up the senior coaching roll with Phil Melon as his assistant. The year started well with over 70 turning up regularly to preseason training. Although we didn’t win any games in League we came close a number of times. Once of note was when big Andrew Ruck played a one off game for us and Sharks came close to beating Railways in a fiery encounter. If big Rucky had been able to kick straight we could have chalked up another victory.

A year where the consensus was the players enjoyed playing regardless of our success and bonded well. This was our last year at North Albany and we will all look back on our years there with some fondness.

Our Own Home At Centennial Stadium

2017 was a year of note and a large milestone as we moved to the new Centennial Stadium facility. After years in the wilderness the Sharks eventually had a home to call our own. Scotty Sedgwick with Kim Mayfield as assistant took the senior coaching position and did a fantastic job with the cattle we had. Reserves won four games and our Under 16’s and Colts both played in Grand Finals.

2018 Kim “Chub” Mayfield with Scotty Sedgwick as assistant continued as the senior coaches in a role reversal. Settled in and enjoying our new home we were looking for a big year. The senior side improved out of sight with margins greatly reduced in and we scared some sides, no one took us lightly anymore.

Reserves won another four games and both Under 16’s and Colts played in Grand Finals with Colts winning the Sharks first ever most coveted Colts Premiership. A milestone of some note was we had Jake Stuart play his 100th game for the club being the first player to achieve this.

Also we saw the women’s competition get under way giving our club another dimension.

All in all a great year to be a Shark, we finished the year celebrating our 10th anniversary since being incorporated which was a great night and well attended. We could all smell success being not far away. 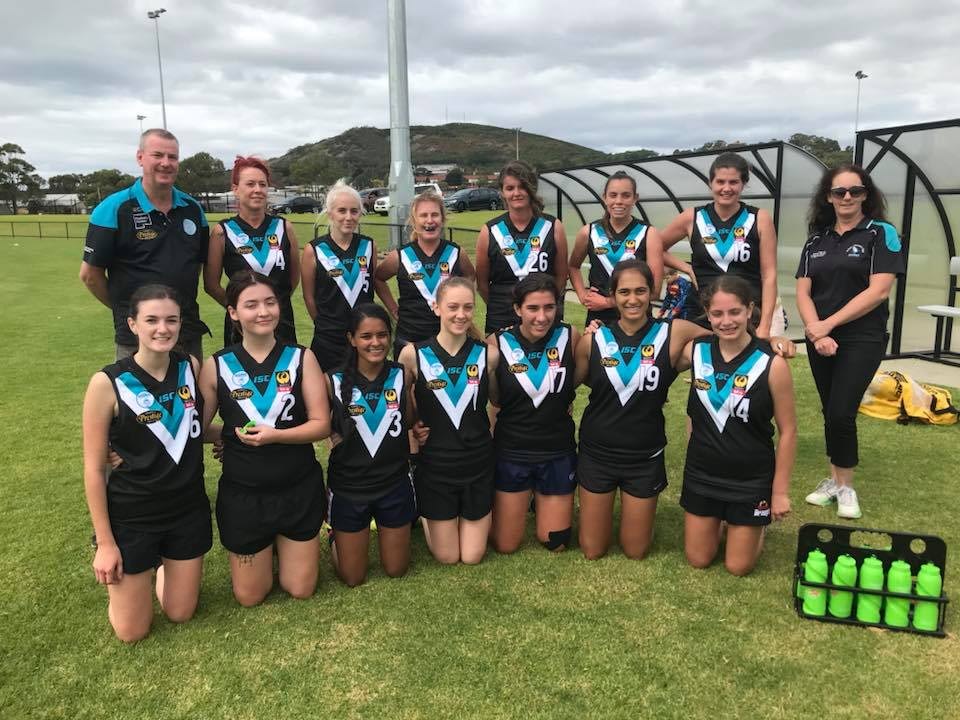 2019 Kim Mayfield and Scotty continued on from where they left off in 2018 and had a great win in the first game of the year against Denmark, our second in history.

With a number of injuries and players missing in action the coaches did a fantastic job of keeping the year going with some respect. Taggs continued with Reserves and won a few games. None of our sides played in any finals of note.

At the end of the year Kim Mayfield stood down as senior coach and Geoff Oldfield resigned as President after 5 years at the helm. Cameron Bergsma was elected as the president for 2020 at the AGM.

With all the changes it is anticipated that 2020 will a very different year for the Sharks.